After seeing Sanne’s video titled Bookmarks & Book Marks (which you can view by clicking here) I immediately knew that I wanted to do a blog post in response to it. And here it is!

1. What are you currently using as a bookmark? Right now I am using a wonderful Doctor Who bookmark that I received for Christmas. 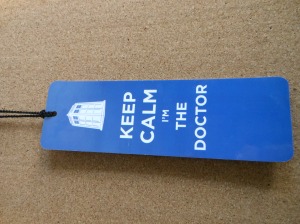 2. Best thing you’ve ever used as a bookmark? Probably either the bookmark mentioned in the last question or my other Doctor Who bookmark, pictured here. 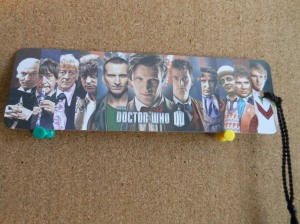 3. Weirdest thing? I tend to use actual bookmarks whenever I read, so I don’t normally use anything unusual. Sometimes I’ll use my receipt from the library or some random piece of paper nearby, but that’s usually the extent of the weirdness.

4. Do you ever annotate/highlight/write in books? Why or why not? All the time! Not so much writing in books, but I am definitely a fan of highlighting and sticky-noting them! I highlight interesting quotes I come across, memorable scenes, etc. Whenever I read books for school I usually sticky-note them so it’s easier to write papers and find important parts later on.

5. Share something you’ve found written in a library book/used book/book that didn’t belong to you. The only thing I can remember ever finding in a book that didn’t belong to me is this My Little Pony sticker that I found in a library book about a year ago. I don’t remember what book it was in, but I saved the sticker because it was so random! It’s currently residing in my desk drawer. 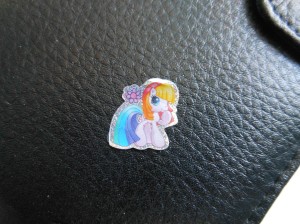 6. What books are in your collection by someone named Mark? After scouring the bookshelves in my bedroom, I’m surprised to say that I only have one book by someone named Mark. It is Salt by Mark Kurlansky, which I read for my AP World History class last year. And yes, it is a book dedicated to the role salt has had in shaping world history. I never thought that someone could write an entire book about salt (or that I would ever read such a book) but Mr. Kurlansky has proven me wrong. I also own The Book Thief by Markus Zusak, although I’m not sure if it counts as a book by Mark. It has the word “mark” in the name, though, which is good enough for me.

7. What book has made the biggest mark on your life? (Figuratively) There are so many books that have greatly influenced me over the years, and I don’t know if it’s possible to name just one. The top few are J.K. Rowling’s Harry Potter series, Looking for Alaska and Paper Towns by John Green, Jellicoe Road by Melina Marchetta, J.R.R. Tolkien’s Lord of the Rings trilogy and The Hobbit…. I could go on for days.

8. Which book has made the biggest mark on your life? (Literally — do you have any literary-related tattoos? If not, and if you had to get one, what would you get?) I don’t have any tattoos, and due to the fact that I faint whenever I see needles I really doubt that I will ever get any in the future. However, if I did get a tattoo in some parallel universe, then I would definitely get one of a quote. Specifically, I would get one that says:

“I go to seek a Great Perhaps.”

This is a quote from poet Francois Rabelais that is a large part of John Green’s novel Looking for Alaska. I love it because it can be interpreted in so many different ways, and can consequently mean something different to nearly everyone.

9. Which book(s) has/have had the biggest impact on your generation in your opinion? I think that the Harry Potter series has probably had the biggest impact on my generation, although Suzanne Collins’ Hunger Games trilogy is a close second. Although, it hard to say if this impact is due to the popularization of the books because of the movies made of them, or if it is from the books themselves.

What are your answers to these questions? Let me know in the comments section below!