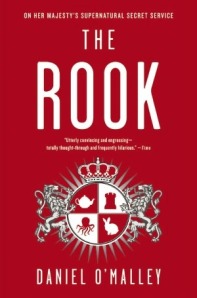 “Myfanwy Thomas awakes in a London park surrounded by dead bodies. With her memory gone, her only hope of survival is to trust the instructions left in her pocket by her former self. She quickly learns that she is a Rook, a high-level operative in a secret agency that protects the world from supernatural threats. But there is a mole inside the organization and this person wants her dead.

As Myfanwy battles to save herself, she encounters a person with four bodies, a woman who can enter her dreams, children transformed into deadly fighters, and an unimaginably vast conspiracy. Suspenseful and hilarious, THE ROOK is an outrageously inventive debut for readers who like their espionage with a dollop of purple slime.”

I decided to read this book because a) I liked the front cover and b) I was very intrigued by the blurb on the back. I had never heard of it before or read any reviews, so I had nothing on which to base my expectations. Luckily, this book would have exceeded any expectations I might have made.

I immediately fell in love with the world that Daniel O’Malley has created. The story is set in modern-day England, but with a supernatural twist. The organization of labor positions within the Checquy, as well as its history of battling fantastical creatures, is incredibly complex and detailed. I was amazed at how specific the author got with nearly all aspects of the setting. Everything was described so acutely that I could clearly imagine Myfanwy Thomas (her first name rhymes with Tiffany) as she spoke with her secretary, Ingrid, or as she fought off the creatures that relentlessly pursued her. The startlingly multidimensional setting is largely what makes the story to engulfing, engaging, and enthralling.

A diverse cast of dynamic characters is another reason this story is fascinating. Everyone has a backstory, each one more unique than the last. Their pasts help to explain why they have become who they currently are, and in a way serves to define them. All characters, both kind-hearted and cruel, are simultaneously a mystifying blend of open and enigmatic. I particularly liked the fact that the real Myfanwy Thomas had a large presence in the novel despite the fact that she no longer existed. Her letters that were included throughout the novel helped keep her personality alive and added even more depth to the story.

Last but not least, the manner in which the plot unfolded was remarkable. The pace was fast enough to constantly keep things interesting but still slow enough to fit in plenty of information about the real Myfanwy Thomas as well as the backstories of other characters. Every detail of the plot is important, even minute ones that are presented at the very beginning. The ending is conclusive, yet there is plenty of room for a sequel. Everything falls into place in the final scenes in a way that makes complete logical sense looking back. However, in the moment I could not predict who the culprit was at all. This shows the cleverness and brilliance of the author in terms of both his writing and his ideas.

Overall, I loved The Rook. The writing is excellent, the characters are multidimensional, the plot is suspenseful, and the premise of the story itself is utterly unique. I was fully invested in this novel from the very first page, and I found myself fervently turning the pages until there were none left. I highly recommend this book!

Would I recommend it to a friend?: Absolutely! This novel is a mix of numerous genres, which means it has a little something for everyone to enjoy.

Have you ever read this book before? What were your thoughts on it? Let me know in the comments section below!

8 responses to “Book Review: THE ROOK”