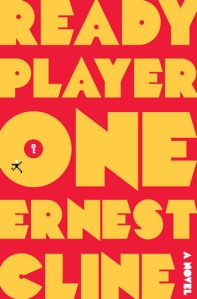 Like most of humanity, Wade Watts escapes his grim surroundings by spending his waking hours jacked into the OASIS, a sprawling virtual utopia that lets you be anything you want to be, a place where you can live and play and fall in love on any of ten thousand planets.

And like most of humanity, Wade dreams of being the one to discover the ultimate lottery ticket that lies concealed within this virtual world. For somewhere inside this giant networked playground, OASIS creator James Halliday has hidden a series of fiendish puzzles that will yield massive fortune — and remarkable power — to whoever can unlock them.

For years, millions have struggled fruitlessly to attain this prize, knowing only that Halliday’s riddles are based in the pop culture he loved — that of the late twentieth century. And for years, millions have found in this quest another means of escape, retreating into happy, obsessive study of Halliday’s icons. Like many of his contemporaries, Wade is as comfortable debating the finer points of John Hughes’s oeuvre, playing Pac-Man, or reciting Devo lyrics as he is scrounging power to run his OASIS rig.

And then Wade stumbles upon the first puzzle.

Suddenly the whole world is watching, and thousands of competitors join the hunt — among them certain powerful players who are willing to commit very real murder to beat Wade to this prize. Now the only way for Wade to survive and preserve everything he knows is to win. But to do so, he may have to leave behind his oh-so-perfect virtual existence and face up to life — and love — in the real world he’s always been so desperate to escape.”

The amount of buzz this book has been getting is incredible. I’ve heard about it on blogs, Booktube, Goodreads- everywhere! Finally I decided that enough was enough: I would read this book myself to see what all of the hype was about. If it had not been for all of the amazing reviews I probably would not have picked this book up. Video games, especially old ones, are definitely not my forte. However, I decided to just give it a whirl anyways for the sake of being able to form my own educated opinion on it later on.

To be honest, I wasn’t sure if I would end up liking this book once I started reading. The incessant eighties references that I didn’t understand became a bit bothersome after a while. I tried looking a lot of the songs and movies up on the internet at first, but there were so many being constantly thrown at me that it soon became impossible to research all of them. Luckily it wasn’t long before I realized that a deep understanding of these references wasn’t essential to the story. More knowledge of this particular decade probably would have made this novel more enjoyable, however it was not necessary in order to follow along with the plot and the characters.

I was really surprised to find that the video game aspect of this book was actually one of my favorite parts. Not only did the OASIS seem like the most entertaining thing EVER (besides books, of course) but it also brought up really interesting questions about human society. For example: What does it say about us that we are so eager to give up reality for a virtual world? and how would our friendships be different if we were forced to base them solely on personality, like in the OASIS? I really liked how the author played with these ideas throughout the course of the story, especially at the end. It was also really interesting to see how Wade, the main character, had mixed feelings toward the OASIS. On one hand, he absolutely loved it. It was where he spent the majority of his time, and he had more friends there than he had ever had in real life. However, he also recognized that humanity was using the OASIS as a way to ignore the serious problems they should have been addressing, such as running out of fossil fuels, impending climate change, the rising rate of global poverty, etc. These feelings mimicked those that I was having throughout the novel as well.

Overall, Ready Player One was an engaging, action-packed, exciting book once I really got into the story. Although I did not think it was flawless, I do see why there is so much buzz about it. I’m so glad I finally decided to read it!

Would I recommend it to a friend?: Yes! I don’t know much about what was popular in the 1980s or about video games, and I still really liked this book. If you’re worried about missing out on the story because of a lack of prior knowledge, don’t be!

Have you ever read this book before? What did you think of it? Let me know in the comments section below!