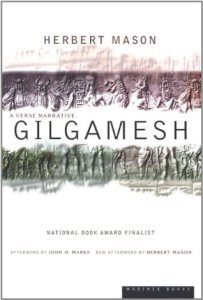 Release Date: (it’s an ancient story, so not really sure what to put here…. this version was published in 1972 though)

“Herbert Mason’s best-selling Gilgamesh is the most widely read and enduring interpretation of this ancient Babylonian epic. One of the oldest and most universal stories known in literature, the epic of Gilgamesh presents the grand, timeless themes of love and death, loss and reparations within the stirring tale of a hero-king and his doomed friend. A finalist for the National Book Award, Mason’s retelling is at once a triumph of scholarship, a masterpiece of style, and a labor of love that grew out of the poet’s long affinity with the original.”

I was given this book about a year ago, and recently I spontaneously decided to pick it up and give it a try. I knew absolutely nothing about this story going into it, but I thoroughly enjoyed it nevertheless!

At first I thought this story was going to be difficult to read, but it was actually quite easy to understand enough to get the gist of what was happening. I went into this book with no knowledge whatsoever of what it was about, but the sections in the back of my copy (including the glossary of names and places) really helped me to put the story into a more specific and accurate context. Some parts were a bit confusing, but in general I was able to follow along without much difficulty. I’m sure I would have gotten more out of it if I had read it in a class at school or had been taught the historical context of it, but for my first time reading it I thought that it was a great experience.

This story is tragic and heart-wrenching, yet there are still undertones of hope present. It’s beautifully written- simple but striking- which really impressed me. It takes skill to be able to transform an ancient story into one that resonates with the modern reader, and I feel as though Herbert Mason executed that excellently. I can see this story being really powerful and helpful to someone who has experienced immense loss in their life, because it focuses on that theme a lot. I think it’s amazing that this story has stuck with human society for thousands of years, and I can completely understand why. Not only is it a touching story, but it is also based on inherently human emotions that we all experience at some point in our lives.

I loved the inclusion of extra material in the back of my copy of this book. Herbert Mason, the writer of this interpretation, explains his personal connection with the story in an autobiographical postscript and discusses why he interpreted it the way he did. I thought it was very interesting to learn about what sparked his interest in this old tale in the first place, and it made the story that much more special and personal to think about and read. There are also two afterwards and some valuable information about the history of the story itself. Along with the glossary, these additions really helped me understand the significance of such an ancient piece of writing. For example, in the “About the Gilgamesh” section in the back, there is a part that says:

“In an age in which we consume and are consumed by a superfluity of one-dimensional images this poem calls us to be profound. And in a war age in which all kindredness is overlooked and life and substance are destroyed indiscriminately, this very old story reminds us what human history, our destiny, and we ourselves really are.”  (pages 101-102)

When I read that part I just knew I had to discuss it in this review because it perfectly captures the way I feel about reading older stories. Despite what some people may say, I strongly believe that stories such as this one hold an incredibly important spot on our modern-day bookshelves. Whenever we get caught up in the chaotic details of everyday life, these stories remind us that there is more to living than what many people choose to focus on: material possessions, appearances, and being wealthy.

Overall, I really enjoyed Gilgamesh: A Verse Narrative and I highly recommend this version of it to anyone who is not very familiar with the story or its historical context. This story just goes to show that just because something is old doesn’t mean it is obsolete!

Would I recommend it to a friend?: Yes!

Have you ever read this story in verse? What did you think of it? Let me know in the comments section below!