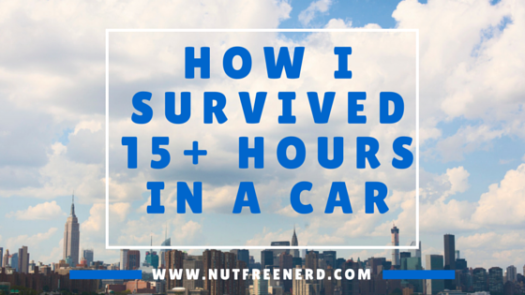 My family and I recently embarked on a road trip to West Virginia for my brother’s soccer tournament, and boy, it was an adventure. Let me tell you: I don’t think I’ve ever appreciated coming home more than when we returned from this trip.

We left early on a Wednesday morning, around eight o’clock. Jamming all of our stuff into the trunk of our small car was an impressive feat, one that I still don’t fully understand how my parents were able to pull off. Now, I live in New Hampshire, and if you know anything about USA geography you’ll probably be like: Isn’t that far away from West Virginia? The answer to that question is a resounding YES. As you can see from the graphic I made (I stole the map from Google images- I’m not THAT fancy!) it’s quite a distance from my house to Charleston, West Virginia. It takes about twelve to thirteen hours to drive there without traffic- and that, my friends, is a LONG time in a car! 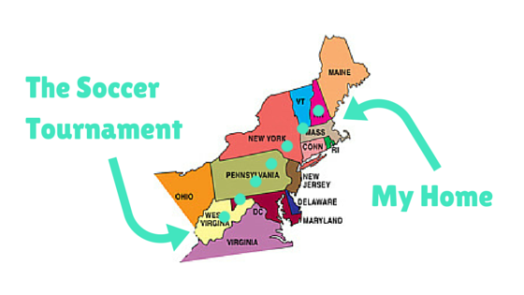 I was prepared for this ride with a TBR pile, of course. It consisted of:

The first two orange boxes are these things called Playaways, which are these little MP3-like devices that come preloaded with one audio book on them. The library I work at has a bunch of them, and they’re great for listening to audio books when you don’t want to bother with CDs or downloading them online. If you guys are interested in learning more about them, just let me know in the comments and I can write a more detailed post about them in the future!

I only ended up completely finishing I’ll Give You the Sun by Jandy Nelson, but I’m more than half way through the other two books. Considering I was only gone for five days, I’ll count that as a success!

The ride to West Virginia wasn’t all that bad, mostly because we left early in the morning and I got a full night of sleep the night before. We left my house at eight o’clock and arrived at the hotel in Charleston, West Virginia a little after nine o’clock at night. It took us a good thirteen hours to get there, but we were so excited that it didn’t really feel that long.

AND on the way there we got to ride past Scranton, Pennsylvania and my adoration for The Office was practically bursting out of me. ❤

This soccer tournament was the Region I Championships, and my brother had three games to play within the three days we were there. (His team ended up losing the first two and winning the last one, but it’s all good!). It was pretty good weather while we were there, although it did starting POURING during the second game.

It’s a good thing our hotel was good, because there was literally NOTHING TO DO in our area. Seriously, what do people do in West Virginia? If you live there, let me know what you guys do for fun, because we came across no attractions or anything! The most entertaining thing was Mosa, this twenty-two year old parrot who lived in a big cage in the hotel. She was ADORABLE, and she even talked to us!

After my brother played his last game on Sunday morning, we embarked on our long journey home. It was by far the worst car ride of my entire life. Most of the other soccer families were driving half way and then staying at a hotel overnight, but my parents decided to just drive straight home. Our projected arrival time was around midnight.

Instead, we got stuck in mega traffic around New York City and New Haven/Hartford, Connecticut. What was supposed to be a twelve-hour drive turned into over a fifteen hour drive, and we didn’t get home until after three in the morning. THREE IN THE MORNING. For some reason it’s hard for me to fall asleep in places other than a bed, so I didn’t even doze off. It was the worst thing ever.

So how did I survive the drive? Here’s how:

Usually I really enjoy road trips, but this one was just SO LONG and so late at night. The trip overall was really fun, though, and in the end it was all worth it!

Do have any fun, crazy, or terrible road trip stories? Have you ever been to West Virginia? Let me know in the comments section below!