5 Reasons Why Internships Are a MUST 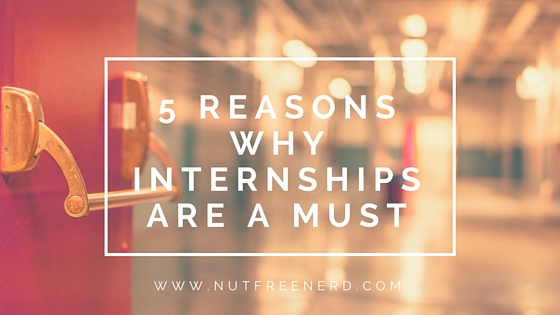 This summer I had the privilege of interning at my local County Attorney’s Office. Law school and a career in the field of law have been possibilities in my mind for years, but I wanted to see if I would still like it when exposed to in a real work setting. At the beginning of the summer I set out to find an internship, and the first office I contacted accepted me after I gave them a cover letter, resume, and had a face-to-face interview.

I was nervous at first, this being my first ever internship, but I quickly learned that as long as you work hard, show a genuine interest in the work being done, and are friendly to others that interning can be really enjoyable. It’s a new place with new people who have so much valuable information and experience to offer you, and that in itself is worth an immense amount of hard work. My internship wasn’t paid monetarily, but I did feel as though I was being “paid” in a way. This office was willing to teach me about what they do simply because I was interested, and that in itself is something to be grateful for.

Even if the internships you’re considering aren’t paid, here is why they are still a MUST to do at least once:

1. Getting Familiar with the “Lifestyle” of the Job

The only job I have ever had has been working at my local public library for the past two years, and therefore I haven’t had to work many long days before. I would generally work four hours at a time, usually from 4 pm to 8pm. However, the attorney’s office I interned at was open from 8 am to 4 pm, meaning that I was there for eight hours at a time, twice a week. I think it was a good for me to experience the normal “office grind” of getting up at six in order to be there promptly at eight, and then having to work my schedule around not getting home until 4:30 in the afternoon.

2. Being Exposed to the Atmosphere of the Workplace

I’ve been a HUGE fan of the US television show The Office for years, but I was fully aware at the beginning of my internship that the office would not likely resemble that of Michael Scott’s in any way. Believe it or not, though, I did find a surprising number of similarities! The vibe was very friendly and casual amongst co workers, there are fun things like Casual Fridays and ice cream sandwiches in the fridge occasionally, and the super nice woman whose desk was closest to mine was named PAM. The atmosphere of a workplace can often make or break a job experience, so it’s really helpful to get a feel for some of them so you know what you do and do not like.

Can you imagine getting out of college, heading to your first job, and absolutely hating it? It’s one of my biggest fears, and internships can help you avoid it coming true. By gaining real work experience in fields you’re interested in, you can get a feel for whether or not you’ll actually enjoy doing it for the rest of your life. And if you decide that it’s just not for you, then it isn’t a lost cause- think about what would have happened if you hadn’t realized it early on!

You never know who you might meet while interning! Your boss, coworkers, and even clients that come in could have the potential to be contacts for future internships and jobs. Anyone you meet could be important, so be sure to be genuinely kind, respectful, hard-working, and enthusiastic about the opportunities you’re given. Who knows- they might be your future employers some day!

Let’s face it: although we might not always like to admit it, one significant advantage of interning is that it adds strength to any resume. In a world where job competition can be fierce, it’s vital to have a solid resume boasting all of your impressive experiences and achievements.

There are numerous other reasons why internships can be extremely valuable and important, but these are the first ones that come to mind. It might seem futile at first, especially if it’s unpaid, but I guarantee that there is at least one lesson or nugget of knowledge that you can take away from the experience in the end.

Do you have any funny or interesting internship stories? Any other reasons why internships are important, or do you disagree? Let me know in the comments section below!