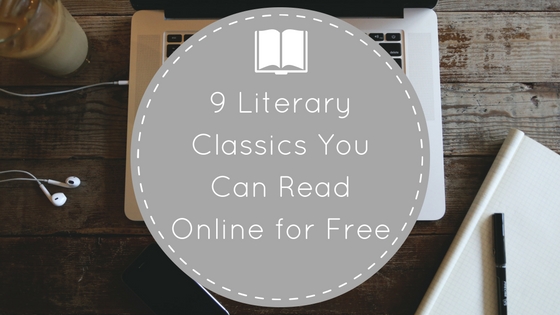 If you’ve been following along with my blog for a while, then you’re likely aware of my love for classic literature. Some people dread reading these works that are usually studied in a classroom setting, but I just can’t get enough of them. Today, Caroline @ Culture Coverage is here to talk about a topic that excites my little bookish heart: 9 Literary Classics You Can Read Online for Free.

When copyright goes out, great literature comes to the masses. If you’re not too attached to paper, bindings and the book smell, you can get the same great texts online for free. From childhood characters to mansion-loving millionaires, these nine classics are sure to become favorites even if it’s your second time around.

Most of these texts can be viewed in a web browser. If you prefer downloadable texts, that’s available too. If you’re overseas and trying to access sites blocked by location, just grab a Virtual Private Network like the ones Secure Thoughts has reviewed to unlock the content, and then you’re free to take your library wherever you wander.

Lewis Carroll’s whacky fantasy full of March Hares, Red Queens and jabberwocks is available for a second run around the rabbit hole. If the last time you read it was in elementary school, it’s got some rather trippy insight even adults will appreciate. You’re going to want to spend your time catching up with Alice, the Mad Hatter, and definitely the White Rabbit—it’s what all the cool kids are doing. Don’t believe me? Disney’s recent release of Alice Through the Looking Glass means the material is still catching the imaginations of the world. Check it out here.

Lovers of Twilight will be surprised to learn the gothic monster of lore in Stoker’s bloodsucking original doesn’t glitter or sparkle and is more than a century old. For those who are new to the vampire genre, you’re in for a treat. From the shores of England to the Transylvanian castle of legendary esteem, the Dracula the modern generation has come to know is far removed from its original, but that only deepens the fanged mystery for those who have never read it. Get ready to get the creeps because Dracula, in all of its bloodlust glory, is one of those fantasy novels that never stays in the past and always finds ways to reinvent itself for the future. Catch it here.

Scott Fitzgerald’s famous novel of the social climbing millionaire in love with his childhood sweetheart is probably the most famous American novel of the last century. If you haven’t spent time with the eyes, the bachelor and that glorious estate, then you just haven’t lived. From the big parties to the heartbreaking love story, this literary journey through the Roaring ’20s and the delights of the American dream is one of literature’s finest examples that money cannot buy happiness, even if it can buy everything else. Read it here.

The classic tale of a beautiful girl losing her glass slipper at the stroke of midnight is a classic for a reason. It just doesn’t get old. Now while the literary version is slightly less inclined to break out into musical numbers involving friendly woodland creatures—the stepsisters in this version cut off body parts to get their feet to fit into the shoes—you’re welcome to glimmer over that part if you’re in it for the love story. Read Charles Perrault’s retelling here.

Long considered the hardest read in the English language outside of Shakespeare, James Joyce’s novel based on Homer’s The Odyssey is not for the faint of heart. The book describes a single day in the life of Leopold Bloom, an advertising man in Dublin. It makes exact correlations to the classical poem, except with new twists, and creates one of the most defining works of modernist literature ever written. A hefty volume with over 18 different parts and some 265,000 words to its name, this undertaking is no walk in the park. You’ll gain literary world bragging rights until the day you die if you make it all the way through. Take the ultimate test here.

As far as dystopian novels go, this is one of the greats. In an alternate universe where Big Brother is always watching, Wilson, a government agent forced to distort and rewrite history, decides to keep a personal diary—a crime punishable by death—and it changes everything. The reader gets sucked into George Orwell’s mind-boggling reality that punishes truth, hates individualism and fears the personal story. For all you conspiracy theorists out there, this read is definitely one you don’t want to miss. Check the text out here.

Is it a coincidence the boy who never grows up is a story that never ages? In J.M. Barrie’s childhood fantasy with ticking crocodiles, mermaids and pirates, the lives of the Darling children are never the same once they meet the boy and his shadow. From thimbles to kisses, pixie dust to Lost Boys, the adventures of Peter Pan and Captain Hook aren’t just for the kiddies. There are a lot of laughs for everyone. Tiger Lily, Smee and the whole gang are around to make reading child’s play, so you don’t need to wait to be asked to babysit to reacquaint yourself with this timeless tale. Read it here.

Kurt Vonnegut’s tale of Billy Pilgrim leads readers deep into Billy’s memory to his time as an American soldier, the bombings of Dresden, his wedding night and the birth of his daughter. Though the book plays with the concept of time—the memories are anything but sequential—this book is by far Vonnegut’s most popular work with a sharp sense of humor and satirical leanings. The passing of time has only cemented its semiautobiographical genius into the heart of contemporary culture. Listen to the audio here.

A Study in Scarlet

A Study in Scarlet is the first in Sir Arthur Conan Doyle’s long-running detective series. Like any good mystery, there’s blood, mischief and mayhem, but, more importantly, the story features two of the most popular figures in modern pop culture: Sherlock Holmes and Dr. Watson. Once you turn the last page, you can tune into the BBC’s latest adaptation starring Benedict Cumberbatch and Martin Freeman to compare how well “A Study in Pink,” the first in the series currently streaming on Netflix, stands up to its literary counterpart. Read it here.

From the forests of Transylvania to planets far, far away, these classics are sure to pique the interest of any bookworm and literary nerd. So what are you waiting for? With the perk that these texts don’t need a trip to Barnes and Noble to get started, there’s no reason to wait. Have any favorites of your own currently up for grabs on the internet? Leave the authors and titles in the comments below. I’d love to add more to my reading list.

About the author: Caroline is a self-proclaimed bibliophile and lover of the written word and spends her time reading the greats and penning her own work. She hopes you love these classics just as much as she does!

Thanks so much to Caroline for writing this guest post! I’ll definitely be checking some of these links out, especially for Peter Pan and Ulysses.

What are your favorite classics? Do you enjoy reading them in general? How do you feel about reading books online? Let me know in the comments section below!