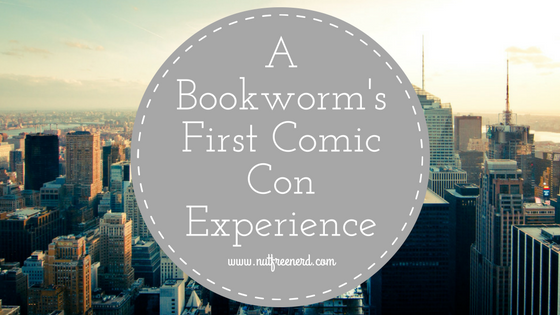 Going to a Comic Con has been a sort of bucket list goal for me since I first learned that they even exist. I’ve always been attracted to the idea of a bunch of people getting together who are all passionate and enthusiastic about fandoms and nerdiness in general. Besides, who doesn’t have a not-so-secret desire to dress up as one of their favorite characters?

You can imagine my extreme excitement when one of my good friends asked me if I’d like to come to the Rhode Island Comic Con with her this past November. My college isn’t that far from Rhode Island and I had no other plans that weekend, so it seemed like the perfect opportunity to finally experience an actual Comic Con.

I had the best time.

I decided to embrace my inner trekkie and went as a female Spock from Star Trek. (Yes, those are Vulcan ears!) My wonderful friend and Disney enthusiast went as Mary Poppins, which was absolutely adorable. Little kids kept coming up to her asking to take pictures and I couldn’t help but feel like we were in Disney World and maybe, just maybe, she had actually been Mary Poppins in disguise the entire time I had known her. (I’m still not discounting that theory– she could definitely pull it off!). I had so much fun walking around in my costume and occasionally busting out the Vulcan salute. (Also, bonus points for my fake ears for not falling off even once!)

As much as I loved the experience of dressing up, it was equally as entertaining to see everyone else’s amazing costumes. From Marvel superheroes and Star Wars characters to pirates and princesses, people really pulled out all of the stops.

Though I had a blast walking around the convention center and perusing all of the geeky goodies for sale, the highlight of the day was attending a Q&A panel with Stan Lee. (Yes, you read that right: the actual STAN LEE.) We got in line well before the event opened because there was limited seating, and I’m so grateful that we were able to get in. As he answered all sorts of questions from audience members I was taken aback by how genuine wit and sense of humor. There was an overwhelming feeling of gratitude and empowerment in the room as we listened to the words of a man whose creativity has influenced our lives in countless ways. It feels so strange to be able to say that I’ve been in the same room as Stan Lee– never in a million years did I think that would ever happen!

My favorite part of this Comic Con experience in general was the feeling of togetherness and unity that seemed almost tangibly present. It’s not every day that you get to be surrounded by so many passionate, enthusiastic, and creative people. It also gave me a great sense of belonging. Sometimes being nerdy and quirky can make you feel isolated from your peers in a sense, but Comic Con helped show me that I should never feel ostracized because of my passions.

Overall, I’m so glad that I had the amazing opportunity to experience my first ever Comic Con. But don’t worry– this certainly won’t be my last!