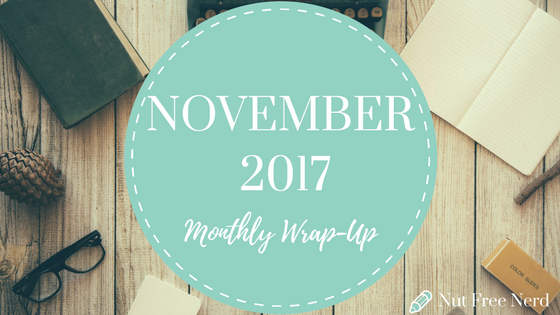 Happy December!! We are now in the middle of my two favorite months of the year: chilly November and festive December (though my November was also incredibly festive!). November has been a whirlwind of travel, celebrations, work, and more work. Now that term has officially ended for me (woo hoo!) I’m really looking forward to some rest and relaxation in December. But before that, let’s see what I was up to in November!

In November I read a total of 3 books:

My favorite book of the month was The Bad Beginning by Lemony Snicket. For some reason I never read this popular series when I was younger so I’ve never understood all of the references people make to them. I definitely regret not reading them sooner– they’re fantastic! So witty! So clever! So dark yet so funny! I’ve been listening to the audio book version narrated by Tim Curry and it’s extremely well done. I can’t wait to continue on with the rest of the series!

I was so busy in November that it feels as though this month has stretched on forever! At the beginning of the month my friends and I took a trip to Brighton, England, which was really beautiful and lovely. You read more about it in my post here, but we basically spent one day perusing the downtown area and exploring the pier and another day admiring the extraordinary Seven Sisters Cliffs. A weekend in Brighton was definitely not enough time and I would love to go back at some point before my year abroad is over.

In the middle of the month I celebrated my 21st birthday! Before you ask: I don’t feel older, especially since it isn’t even a big marker of drinking age in the UK. Still, I had a really great time with friends and I’m so thankful to be surrounding by such wonderful people.

Come to think of it, November has been a flood of holidays and celebrations. Not only did I have a birthday this month, but we also celebrated Thanksgiving and Oxmas. Since most students move out of their college accommodations for winter break, the city of Oxford gets into the festive spirit even before Thanksgiving. Streets and shops have been decorated for weeks now, and my college even had Christmas carol services and a formal dinner for us all. I feel like Christmas is right around the corner already even though December has just begun!

Of course, November wasn’t all fun and festivities: I’m finally done with all of my work for the term! An eight-week term might sound like no time at all, but the work is so intense that eventually it feels like you’ve been reading about Victorian literature and Faulkner for ages. I’ll miss the subjects I studied in Michaelmas, but I’m equally excited to launch into new subjects in Hilary. I can’t believe I’m already a third of the way through the year!

Now that term has officially ended, I should finally have more time to actually blog on a regular basis! I’ve pretty much depleted my store of posts I had scheduled in advance, so it’s back to the blogger drawing board. I’ve got some new ideas I’ve been eager to try and I can’t wait to be able to read and comment on all of your lovely posts again. ❤

Here are some notable posts from my blog this past month:

Here are some posts that I loved reading this month:

How was your month of November? What was the best book you read? Did you do anything really fun or exciting? Let me know in the comments section below!