Today’s Feminist Fridays feature focuses on another text I’ve read for a tutorial this term: H.G. Wells’ 1909 novel Ann Veronica. Set at the turn of the century, the novel tells the story of a young woman named Ann Veronica who yearns to achieve a sense of personal independence from her controlling father. What begins as mere trips to London and an aspiration to study science at a prestigious university ultimately leads to involvement in the woman’s suffrage movement, an unpleasant affair, and even eventual elopement. Although the beginning of this novel seemed to promise an empowering feminist read, it ultimately left me with a sour taste in my mouth and more conflicting feels than I know what to do with. 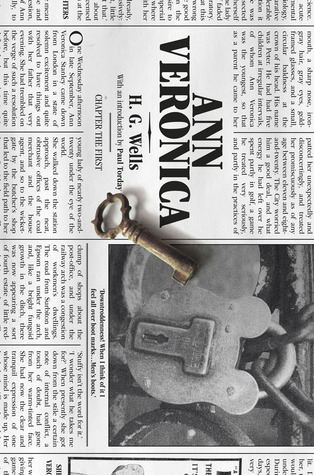 On the surface, it seems as though this novel is about a young woman breaking away from traditional Victorian gender expectations and achieving independence as a New Woman. However, a closer look reveals that Ann Veronica doesn’t quite reach as far as one would hope or expect. Although she does get involved with the woman’s suffrage movement while in London and even spends time in jail after participating in a protest, she quickly abandons the endeavor when she realizes that she doesn’t fit in with the supposed “man-hating” suffragettes. Wells paints an overtly negative portrayal of the suffragettes, implying that they have no sexual desire and are destined to live their lives alone and unmarried. Ann Veronica may have left her controlling father behind when she moved to live by herself in London, but she is never without influence from an older man. She continually revolves circles around the men in her life, following their actions and taking on their beliefs. The most obvious example of this (spoiler ahead!) is when she gets married at the end of the novel and is no longer referred to as Ann Veronica but “Mrs. Capes” instead. In this way, Ann Veronica travels full circle from the hands of one man (her father) into the hands of another (her husband).

The more I researched about this novel, the more I began to question it as a feminist text. Apparently it was written as a sort of autobiographical story about H.G. Wells’ own affair with a woman named Amber Pember Reeves. This brings up interesting questions about what his motivation was for writing this novel in the first place. Wells also has rather hypocritical views on woman’s role in society as well. Although he was a proponent of “free love,” he only did so under the stipulation that it should be for reproductive purposes. There was little room for complete equality between men and women in his ideology.

The novel is also complicated by the fact that it is a man writing from the perspective of a woman. How could Wells possibly know what it is like to be a woman living during this time? How are we to trust his opinions when he has not experienced gender inequality for himself? It’s all too easy to take this novel at a distance and categorize it as a feminist work, but the more I think about it the more I wonder whether this is an accurate label at all.

Ann Veronica may be frustrating and infuriating to read, but it is also a fascinating look at what a man thought a woman’s life should be like at the turn of the twentieth century. If you want a novel that will challenge how you think about gender roles and woman’s rights, definitely check this one out!

What are your thoughts on Ann Veronica? How do you feel about male authors writing from a female perspective? Let me know in the comments section below!