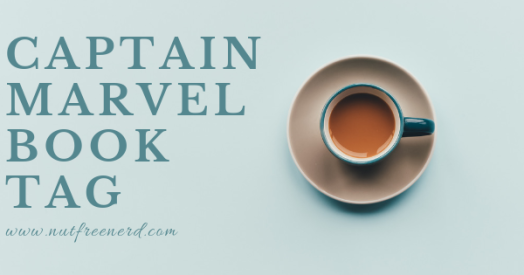 Today I’m here with the Captain Marvel Book Tag! Thanks so much to Marta @ The Book Mermaid for tagging me!! Even though I’m a huge Marvel fan, I’m also horrible at staying up to date with movies and TV shows… so I haven’t exactly seen Captain Marvel yet. *Gasp!* I know, I’m very behind on the times. However, these questions seem easy enough to answer without having seen the movie, so let’s give it a go!

CAPTAIN MARVEL – WHICH CHARACTER WOULD YOU PHOTON-BLAST?

General Woundwort in Watership Down by Richard Adams. What an evil rabbit!! Even his name is unpleasant, which I feel like is always a sign (never trust those icky alliterative names). Did I mention he’s also the dictator of a rabbit cult? The worst.

Although I knew it existed when I was younger, I wish I had read A Series of Unfortunate Events by Lemony Snicket when I was a kid instead of when I was twenty-one years old. Don’t get me wrong, I greatly enjoyed it when I read it abroad; however, I feel like Young Holly would have had an even better experience reading it in her prime.

KREE – A TEAM THAT WOULD FIGHT TOGETHER AND DIE TOGETHER?

Sherlock and Watson in Sherlock Holmes by Sir Arthur Conan Doyle. Even though they may get on each other’s nerves at times and see the world very differently, this dynamic duo always looks out for one another when times get tough. You know what they say: opposites attract!

Does Professor McGonagall count? When I read this prompt I immediately pictured her transforming into a cat, the embodiment of independence, cleverness, and wisdom in both human and animal form. She’ll forever be one of my very favorite Harry Potter characters!

I would pay money to be a fly on the wall of Virginia Woolf’s brain! Her life is fascinating to read about and her writing is just brilliant–I can only imagine how thought-provoking a conversation with her would have been!

When I first saw the cover of Station Eleven by Emily St. John Mandel, I figured it was a book about some sort of camping community or festival where things go awry at night. Anyone who has read Station Eleven knows that the reality is very, very different!

FIGHTER JET – WHAT SWEET RIDE (FICTIONAL) WOULD YOU LOVE TO HAVE?

I’d love to take a ride in the time machine in Timeline by Michael Crichton–provided that it actually brings me back in one piece!

PAGER – IN THE TIME OF NEED, WHICH CHARACTER WOULD YOU CALL TO SAVE YOU/THE UNIVERSE?

Definitely Westley in The Princess Bride by William Goldman!! So clever! And agile! And talented! And kind! And attractive…

What are your answers to these questions? What do you think of mine? Have you seen Captain Marvel? Let me know in the comments section below!

Had to find a plain book cover to balance out this loud sweater that I love 💕🙈 It’s officially the end of my first week of the second semester of law school, and I actually managed to get ahead on work while also getting some reading done! I finished Find Me by Andre Aciman, the sequel to Call Me By Your Name And I have... conflicting thoughts. 🙃 Any tips for sorting out thoughts about a book?? • • • • • #bookstagram #bookishlovegroup #lawschool #findme #callmebyyourname #bookphoto
I reviewed The Testaments by Margaret Atwood last week (link in bio!) in a new format that I’m trying: a letter to the book itself. I had so much fun with it! If you haven’t read this sequel, you absolutely must! Have you read The Handmaid’s Tale or this sequel? What did you think? • • • • • #handmaidstale #thetestaments #margaretatwood #bookishlovegroup #bookstagram
Here I am with the only plant in my room that survived winter break 😢 I may be a bookworm, but I do not have a green thumb! 🌱 Do you have any plants? Do you like growing them? • • • • • #bookishlovegroup #bookstagram #polaroids #plants
First day of 2nd semester today!! Back to endlessly reading textbooks and nervously preparing for cold calls. ⚖️ Even though this is technically my 17th year of education (high school, undergrad, and now law school) I never get tired of that first-day-of-school feeling 📚 • • • • • #lawschool #bookstagram #bookpics #bookblog #bookishlovegroup