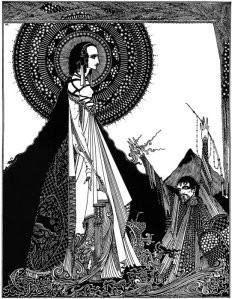 “I cannot, for my soul, remember how, when, or even precisely where, I first became acquainted with the lady Ligeia.”

As the first sentence suggests, this short story is about the narrator’s lover, Ligeia. After describing precisely why he loves her so much, he reveals the unfortunate circumstance that has befallen their love: Lady Ligeia is sick, seriously so. One thing leads to another, and soon both the narrator and the reader are faced with a situation they never saw coming.

I apologize for the fairly vague summary, but I wrote it that way for two reasons. First, I didn’t want to give anything away that could be considered a spoiler. But the primary reason is that not much happens in this story, so there isn’t really a lot to summarize without getting into the ending. The first half of the story is basically just the narrator describing in great detail why Ligeia is so fabulous and why he loves her so much. After that some little things happen, and then there’s the ending. That’s essentially it. Although I did really like the ending- it’s unexpected and a little frightening, very Poe- I’m not sure if it was worth reading all that, well, boring stuff in the beginning.

Overall, I thought this short story was just so-so. It wasn’t terrible, but it’s not one of Poe’s better ones.