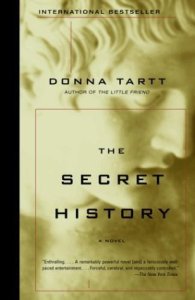 “Under the influence of their charismatic classics professor, a group of clever, eccentric misfits at an elite New England college discover a way of thinking and living that is a world away from the humdrum existence of their contemporaries. But when they go beyond the boundaries of normal morality they slip gradually from obsession to corruption and betrayal, and at last – inexorably – into evil.”

Ever since reading and loving The Goldfinch, I’ve wanted to read more of Donna Tartt’s work. After reading some glowing reviews of The Secret History, I finally decided to give it a go. And wow, did this one surprise me!

This novel truly does suck you into the world of its story. I couldn’t go long without reading at least a few pages, and I found myself reading upwards of 50 to 100 pages at a time because it was so gripping and suspenseful. In some regard, you know exactly what happens at the very beginning- Bunny dies- because it tells you right away in the prologue. But that’s just the tip of the iceberg! So much more occurs that I never saw coming. The twist at the end was tragic and unexpected, yet in some ways I’m sort of surprised that I didn’t predict it because it makes perfect sense. I really liked how Tartt thoroughly explains what happens to most of the characters at the end, with the exception of Richard, the narrator. You feel like you’ve been given plenty of answers and information, but there’s still some mystery to keep you wondering.

The characters are all quite unlikable, but strangely enough I found myself feeling sorry for them at times. Not very deeply, because what they did was terrible and not justifiable in my opinion, but there were a few parts when I could glimpse their humanity. That’s sort of how the overall tone of the book felt to me: a conflict between right and wrong, good and evil, beautiful and ugly.

The writing, as Donna Tartt’s writing always is, was beautiful and lyrical. Hampden College, where it takes place, is also based on Bennington College, which is really cool! It doesn’t say that anywhere in the novel, but there are so many similarities between the two that if you know what you’re looking for you can figure it out. I do wish, however, that there had been less of a focus on drugs and alcohol. This seems to be a main theme of her novels (The Goldfinch was like this too) and personally I would rather a book not have such a large emphasis on it. I understand that they’re crazy college kids so most likely there will be drugs and alcohol involved, but I don’t think it needed to be mentioned to the extent that it was.

Overall, this novel had so much more complexity and depth than I initially expected, but I loved it all the more for it. The story is haunting and the characters and events will linger on in your mind long after you set this book down. Once again, Donna Tartt has delivered a brilliant, fascinating, and gripping story.

Would I recommend this to a friend?: Yes!! Especially someone who likes mystery, suspense, or Greek/Latin works.

Have you read this book before? What are your thoughts on it? Is there any other work by Donna Tartt that you would recommend? Let me know in the comments section below!