ABOUT GRACE by Anthony Doerr 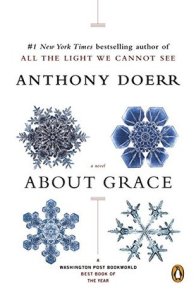 Anthony Doerr’s All the Light We Cannot See is easily one of the best novels I have ever read. I read it during Christmastime in 2014 and absolutely gushed about my love for it in a review I wrote shortly thereafter. It’s one of those books that sticks with you long after you read it, and consequently I’ve been thinking about it ever since. One of the things I loved most about that novel was the beautiful writing, so I began looking into some of the other works that Doerr has written. Recently while browsing the shelves in a bookstore I stumbled upon Doerr’s very first published novel, About Grace, and I decided that I would give it a try. The premise sounded interesting enough and, given my adoration for his more recent work, my expectations were quite high.

Unfortunately, About Grace proved to be no match for All the Light We Cannot See. Normally I don’t like to compare books by the same author too much because I recognize that they are separate works that won’t necessary be equivalent to each other, but in this can’t I just can’t help compare them at least a little bit. The latter is actually longer than the former, yet it feels as though it’s the opposite way around. Doerr’s writing is still incredible in All the Light We Cannot See, but it’s a much shorter style than in About Grace. It’s clear (in my opinion, anyways) that Doerr’s storytelling abilities have greatly improved since writing his debut novel, which is to be expected and admired.

The most detrimental flaw of this novel is its achingly slow pace. Not much seems to happen besides Winkler, the main character, traveling around as he struggles to understand and control his dreams. Even when major events do occur, they unfold at the sprinting speed of a sloth (i.e. not quickly at all). The plot picks up at the end, so much so that the last fifty pages or so of the book feel almost rushed. Numerous significant events occur towards the end, making the reader feel as though Doerr is trying to cram everything in at the last second before it’s too late. I think it would have been beneficial to cut out some of the middle and take more time with the interesting section at the end. Length doesn’t usually bother me, but About Grace probably didn’t have to be four hundred pages long.

There is absolutely nothing wrong with a novel being driven more by characters than by plot– so long as it is executed well. Sadly, About Grace fell a bit short from hitting the mark in this regard. The general idea of the story– a man whose dreams predict what will happen in the future, unless he takes action to change it– is fascinating, but the novel itself didn’t effectively support it. Not only is the pace incredibly slow, but Winkler is certainly not the best character to concentrate on for practically the entire novel. Character-driven stories need to have strong characters with a lot of depth and personality. I’m not saying that Winkler didn’t have these qualities, but, to be frank, he was just sort of frustrating. He couldn’t make decisions, yet when he did he was wildly impulsive. Also, I couldn’t help but he as though he is quite selfish. Sure, he does his best to save Grave and go out of his way to change the future when he has his ominous dreams, but he seems to rarely take into account how his actions will truly impact others. We see this in the very beginning when he develops a romantic relationship with Sandy, a married woman. Keyword: a married woman. He convinces her to move to Ohio with him and completely leave her husband and life in Alaska behind without any regard for how her husband might feel. He ruins the husband’s marriage and the most feeling this action evokes from Winkler is fear that the husband might try to find him and hurt him or Sandy.

Consequently, my opinion of Winkler was rather ambiguous throughout the novel. There were moments when I empathized and even related with him, especially when he talked about his passion for snowflakes. I, too, feel that sort of rapturous enthusiasm towards things in my life (books! writing! hiking!) and it was nice to finally be able to make a connection with this character. However, then something would happen and Winkler would show his selfish or insane side and I would take a step back and think: Really? You really have to be that way? To be honest, Winkler reminded me a lot of Robinson Crusoe in the way that he was constantly thinking and reflecting and having existential crises of some sort. I had such an internal debate about whether or not I liked Winkler, but I’m still not actually sure which side was the victor.

Doerr’s stunning writing is definitely this novel’s most redeeming quality. He has a talent for working with language to which few authors I’ve read can even come close. In my mind, beautiful writing is a signature of Doerr’s work. Even though the story itself wasn’t that extraordinary, the writing never failed to captivate and impress me. What this novel lacks in effective storytelling it makes up for with Doerr’s exceptional writing.

This review may sound rather negative, but I must say that overall I did enjoy reading About Grace. No, it does not even come close to the superior All the Light We Cannot See, but that is okay. It’s his debut novel, after all. I feel like this is one of those books that either clicks with you or doesn’t, and unfortunately I was part of the latter group. Nevertheless, I’m glad that I read it and I’m looking forward to reading more of Doerr’s work in the future!

Would I recommend it to a friend?: Only if they enjoy Doerr’s work in general. For example, if they have read All the Light We Cannot See then I would mention About Grace. Otherwise I would recommend his more recent work.

Have you ever read this novel? What are your thoughts on it? Let me know in the comments section below!

8 responses to “ABOUT GRACE by Anthony Doerr”