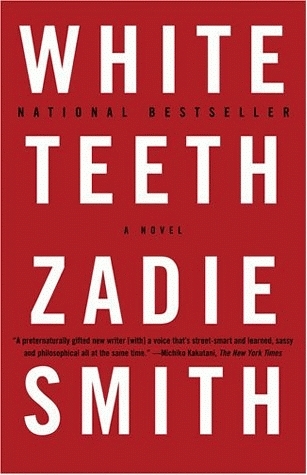 “Zadie Smith’s dazzling first novel plays out its bounding, vibrant course in a Jamaican hair salon in North London, an Indian restaurant in Leicester Square, an Irish poolroom turned immigrant café, a liberal public school, a sleek science institute. A winning debut in every respect, White Teeth marks the arrival of a wondrously talented writer who takes on the big themes —faith, race, gender, history, and culture— and triumphs.” {Goodreads}

Zadie Smith is one of those authors that I’ve been meaning to read for ages but just never got around to doing so…. until White Teeth popped up on this term’s required reading list. Needless to say, I was pretty excited. How often is it that a personal and academic TBR line up?! (I mean, mine tend to line up pretty frequently, but this was a special scenario.) I purposely decided to put this novel towards the end of my reading list as motivation to get through the rest as quickly as possible. (Do I motivate myself to read certain books by rewarding myself with the chance to read other books? Indeed.)

I was honestly shocked when I read Smith’s short bio in the back of the book and learned that White Teeth was her debut novel. I once read a review that described this novel as “Dickensian” in scope and grandeur, and to be honest that is probably the most accurate description I could offer. There is a sprawling cast of characters from a diverse array of countries, backgrounds, socioeconomic classes, religions, and generations. Just when you think you’ve gotten a handle on all of the characters, Smith introduces entirely new families and groups of people into the mix. These characters are not introduced simply as a way to further the plot; rather, they bring out different sides of pre-existing characters as well as more depth in the story itself.

White Teeth explores countless fascinating topics that are relevant in our society today as well as in their earlier context of the novel. Fate or free will, the end of the world, experiments on animals, the role of women in society, dualities, how we view the past in the present, the concept of multiple truths– the list goes on and on and on. It’s incredible how much Smith was able to pack into these 448 pages and still have it be a coherent, cohesive novel in which all the pieces come together at the very end. It helps that Smith’s writing and storytelling abilities are remarkable, as shown in her ability to reveal that seemingly simple and obvious ideas are actually fascinatingly multifaceted:

“If religion is the opiate of the people, tradition is an even more sinister analgesic, simply because it rarely appears sinister. If religion is a tight band, a throbbing vein, and a needle, tradition is a far homelier concoction: poppy seeds ground into tea; a sweet cocoa drink laced with cocaine; the kind of thing your grandmother might have made.”

Unfortunately, the ending was the weakest point of the novel in my eyes. I was expecting an epic convergence of all of the characters culminating in some sort of jaw-dropping reveal; instead, there was a confusing jumble of events that I still don’t really understand fully. Part of me wonders if that is precisely the point: life is messy and doesn’t really make sense or live up to one’s expectations all of the time. But does that really make a lackluster conclusion to an otherwise fantastic novel worth it? Not really.

Overall, White Teeth has made me an avid Zadie Smith fan who is incredibly eager to read more of her work. I thoroughly enjoyed this novel (despite its rather disappointing ending) and I look forward to reading much more of her writing in the future. I would highly recommend this novel to anyone who hasn’t read Zadie Smith before!

What are your thoughts on White Teeth? Which Zadie Smith novel should I read next? Do you have a favorite? Let me know in the comments section below!