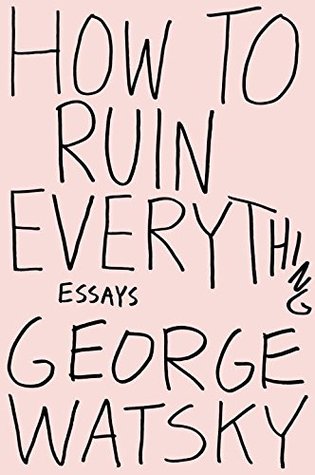 My brother has been a fan of Watsky’s music for years, but it wasn’t until recently when I met him at NerdCon that I really started listening to his music. It only took a few rhymes and rhythms to have me completely hooked on his words, listening to his music any chance I could get: while walking to class, doing laundry, getting ready in the morning, and even while (attempting) to do homework. Then one day, my brother said: “He wrote a book, you know.”

He wrote a book. Those four words led me to borrow my brother’s beloved copy of George Watsky’s How to Ruin Everything as soon as I got home for spring break. Devouring this collection of essays in just over twenty-four hours filled me with an even greater appreciation for this artist– not only of his work but of his determination, hard work, and positive outlook on life.

Of course, the English major in me was thrilled to discover that Watsky’s spoken word skills carry over into his ability to write prose that is casual, conversational, witty, and thought-provoking. His writing does everything that good writing should: it makes you feel as though you’re right there beside him, reliving his experiences through a kaleidoscope of his and your perspectives. The narration is engaging, funny, and has a strong sense of personality that comes off as undoubtedly genuine. One of my favorite lines of this book appears in his essay titled “What Year Is It?” in which he talks about his experiences with epilepsy. The last line of the essay reads:

“I catch my reflection in the water, pieces of me plagiarized from the past—Dad’s nose, Mom’s chin, her dad’s hair, his sister’s brain—and look up to admire the scenery, while I can.”

Plagiarized from the past. That’s brilliant. 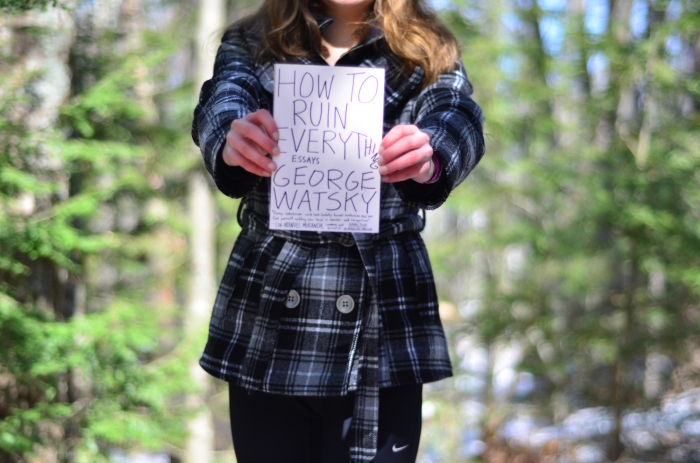 This essay in particular is just one example of the personal stories that Watsky includes in this collection. There’s a juxtaposition between his touching childhood memories and hilarious awkward experiences that somehow just works. From stories of travel and relationships to discussions of being a vegetarian, performing slam poetry at college campuses, and even an entire essay about his old tour vehicle, Watsky incorporates more topics and tales than I thought possible in such a slim volume. All of the personal information he shares contributes to an overwhelming feeling of authenticity in this text, the sense that he is confiding in the reader as though he or she were an old friend. It’s honest and endearing and makes for a book that is impossible to put down.

Though all of the essays are remarkably different, they’re nevertheless tied together through a common thread: failure. Yes, Watsky has succeeded in writing a hilarious, entertaining, and surprisingly optimistic book about… well, not succeeding. (Ironic, no?) Time and time again he recounts experiences that didn’t go quite as planned or that took a sudden turn for the worse, yet there’s an underlying tone of optimism that runs like a current beneath the surface of his writing. It’s difficult to choose a favorite essay out of the entire collection, but the one that sticks out the most in my mind is the very first one, titled “Tusk.” In this essay, Watsky tells the story of when he and some friends smuggled a narwhal tusk over the Canadian border into the United States as a gift for a one hundred year old woman. If that’s not a conversation starter, then I don’t know what is!

Overall, reading this book felt like having the a random, hilarious, and well-spoken conversation with Watsky. How to Ruin Everything is definitely something I’ll be returning to in the future– for a laugh, for inspiration, and to be reminded that there’s nothing quite like the power of a good story.

Would I recommend it to a friend?: Absolutely! I would recommend to any of my friends, regardless of whether or not they have listened to Watsky’s music.

Are you a fan of Watsky’s music or writing? What are your thoughts on this book? Let me know in the comments section below!

12 thoughts on “HOW TO RUIN EVERYTHING by George Watsky | Review”