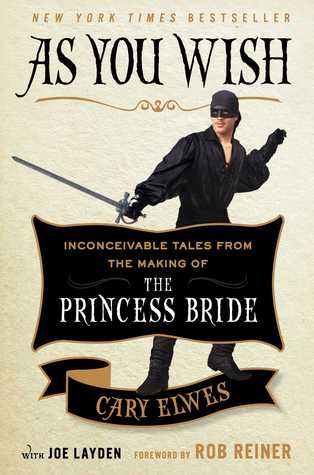 As you could probably tell from my review of William Goldman’s The Princess Bride, I’m a huge fan of both the novel and movie adaptation. Eager for more of this fantastic story, I recently turned to Cary Elwes’ book As You Wish in order to satisfy my fantasy-adventure-romance-comedy cravings. (I really don’t know how else to describe the story of The Princess Bride in general– it’s sort of a mix of every genre ever.) Filled with funny stories of cast members and fun facts about the making of the movie, this memoir is truly a one-of-a-kind reading experience for any Westley and Buttercup fan.

Elwes tells the story of his involvement in making the movie The Princess Bride chronologically from when he was first casted for the role of Westley to the movie’s twenty-fifth anniversary in 2012. He includes quotes from numerous cast members, offering different perspectives and insights on the moments and memories he mentions. It’s interesting to hear everyone’s thoughts on the same experiences as well as their feelings towards Elwes in general. For me, the inclusion of these perspectives encapsulates the close-knit the community of cast members that the production of this movie created.

It was also interesting to learn that they didn’t think the movie would ever be as successful as we know it to be today. According to Elwes, the producers were merely hoping that they could do the popular novel justice, especially since it was William Goldman’s favorite work that he had written. Many of the people involved with the making of the movie were fond of the novel (Elwes had grown up reading and enjoying it as one of his favorite books), meaning that dozens of people were invested in making the film the best it could possibly be. Their dedication to this movie became incredibly apparent to me when reading how much time and effort Elwes and Mandy Patinkin put into training for the famous duel scene. It’s no wonder that it looks so amazing!

My favorite aspect of this book was the nostalgic feeling it filled me with as I was reading it. Elwes writes with a very nostalgic tone in general, which makes it difficult not to invite that warm and fuzzy sensation into your stomach. It’s obvious that acting as Westley in this movie left a lasting positive impression on Elwes and undoubtedly influenced the rest of this life. His enthusiasm and love of The Princess Bride is contagious and reminded me of why I love the movie as well: the community surrounding it. Sure, the movie itself is hilarious, brilliant, and captivating, but the viewing experience brightens considerably when watched with friends.

My only complaint is that this memoir did seem a bit artificial and forced at times. Elwes offered so much praise of the directors, producers, and other cast members that it seemed as though a third of book was him trying to please and thank as many people as possible. While that is certainly an admirable goal, I think there is a different time and place for such an endeavor. If the book is intended for an audience composed mainly of fans, then it should focus on sharing the stories and experiences that the fans really want to read about. An acknowledgments section at the beginning or end of a book is the perfect place to express gratitude and praise those involved with the making of this incredible movie– much more effective than constantly peppering the rest of the book with random rambles of recognition.

Overall,  reading this memoir was such a fun, entertaining, and interesting experience. Not only did I learn a lot about Elwes and everything that went into making this movie, but my eyes were also opened to the entire filmmaking process in general. As You Wish is a must-read for any fan of The Princess Bride. Now all I want to do is rewatch the movie!

Would I recommend it to a friend?: Yes! Especially to those who love the movie The Princess Bride.

What are your thoughts on this book? Do you like The Princess Bride? Let me know in the comments section below!

6 Replies to “AS YOU WISH by Cary Elwes | Review”