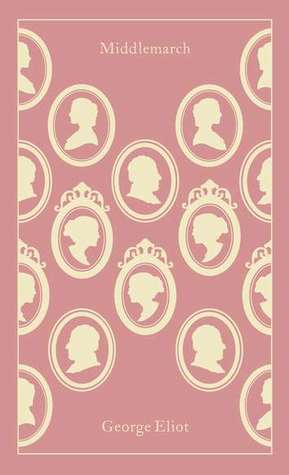 George Eliot’s classic novel Middlemarch has been on my bibliophilic radar for years, though I never found time to read it until it appeared on one of my required reading lists for Oxford. I once had a professor who described Middlemarch as being a “smarter Pride and Prejudice.” This comment immediately intrigued me. What did he mean by smarter? His remark came back to me as soon as I started reading Middlemarch and now that I’ve finished I think I may understand what he was trying to say.

Middlemarch is about so much more than courtship, engagements, and marriages; of course, the same rings true for Jane Austen’s Pride and Prejudice, but in a more subtle way. Eliot uses Victorian romance and courtly love as a vehicle for telling the story she actually wants to convey. The hierarchy of socioeconomic class is at the heart of nearly every decision each character makes, whether that be in the form of their access to money, their thriving or dwindling social network, and even judgment from others. Dorothea Brooke, the protagonist, is an embodiment of this message. Though she quickly marries, she does so out of an intense desire to serve the greater good, gain valuable knowledge with which to help others, and help her new husband in his theological studies. Her decision later on in the novel regarding another love interest may appear to be solely a display of affection; however, it is actually a statement about defying the expectations that correspond with the socioeconomic hierarchy. Rather than comply with the wishes of her family and friends, she chooses to follow her gut instinct and disregard societal judgement.

We see the influence of social expectations reflected in nearly all the characters in Eliot’s fictional town. Though Dorothea may be considered the protagonist, Eliot brings us into the lives of several other notable figures as well. The focus often shifts from Dorothea’s predicaments to those of her sister and other local families, giving the reader a close look at several different relationships and scenarios. I was impressed by how seamlessly Eliot connects them all via engagements, business negotiations, family ties, and unexpected events. However, even with a rotating cast of characters, the pace of Middlemarch felt slow in the middle five hundred pages or so. It’s natural to have ups and downs in pacing as the plot thickens and then problems resolve, but at times the pace of the novel felt almost glacial.

The basic story of the novel wasn’t what I was initially expecting, though I enjoyed it nevertheless. I was surprised to realize how interesting doctors and medical treatment was during this time period. Because doctors were often expected to treat patients in their homes, there’s an important level of trust and intimacy between the patient, family, and medical provider. The socioeconomic hierarchy also plays an interesting role in this dynamic because the doctor wishes to be perceived as professional and competent enough to be called upon by wealthy, respected households. I appreciate Eliot’s focus on a rather mundane aspect of daily life because it reveals a surprising amount about social circles in a town such as Middlemarch.

Overall, Middlemarch was well worth the long wait it took to finally be read. Was my professor correct when he deemed Middlemarch to be a “smarter” Pride and Prejudice? I guess that depends how you define “smarter” as well as how determined you are to categorize or rank novels by certain (and rather arbitrary) criteria. Though Eliot may be blunter than Austen when it comes to portraying the influence of societal expectations, but I believe that both novels contain valuable insights about Victorian society.

Would I recommend it to a friend?: Yes! Especially to those who enjoy the work of Jane Austen, the Brontë sisters, and Elizabeth Gaskell.

What are your thoughts on Middlemarch? Have you read any of George Eliot’s other novels? Have any recommendations? Let me know in the comments section below!

I just love the color combination on this cover 💛💖🧡 Are there certain colors on book covers that you tend to gravitate towards? • • • • #bookstagram #bookish #bookishlove #bookishlovegroup #nutfreenerd
Happy Friday!! I am officially on my spring break and I’m so excited to get some good reading in during the next week 🎉 Here are some books that I’m thinking of reading... which one should I read first? • • • • • #bookstagram #bookishlovegroup #bookish #tbr #lawstudent #bookblog #nutfreenerd
Meet my new moss friend!! 🍄 I love having plants in my room, but I definitely do not have a green thumb... 🌱 Q: What’s a hobby of yours outside of reading? • • • • • #nutfreenerd #plantsofinstagram #moss #bookish
A busy busy day today, but I’m trying not to stress too much about it! Instead, let’s chat: what are you #currentlyreading ?? 📖 I’m listening to the audiobook of Redwall and it’s so fun! 🐭 • • • • #bookstagram #bookish #bookishlovegroup #amreading #bookblog #nutfreenerd