OF MICE AND MEN by John Steinbeck | Review

John Steinbeck’s classic novel Of Mice and Men is one of those books that people are usually assigned to read in high school; however, for some reason I was never assigned this in all my years of high school and as a college English major. I figured that I should probably read something by Steinbeck since I am a self-proclaimed lover of American literature, so I finally decided to pick up Of Mice and Men this past summer. I ended up reading it in one sitting one morning–partly because it is a short book, but also because I just had to know what happened to Lennie and George. Also, a warning: this review contains spoilers.

I had put off reading this book for years because rumor on the street was that it was sad. And boy oh boy, was it emotional. I was on the edge of my seat the entire time because something about the story makes you feel as though it won’t have a happy ending. I think what did it for me was Lennie constantly asking George to repeat the story of his ideal future: a house on a farm with rabbits to take care of, where they could be together and live off the land. It sounded like such an idyllic, perfect vision, but I had a feeling that with each repetition it was less and less likely to happen for them. Steinbeck seemed to be pointing a finger at this picturesque future as if to say, “Enjoy this vision while you can, because it won’t be here for long.” And he was right. Tears welled up in my eyes when George shot Lennie at the end. I hated George in that moment, but I also recognized that he was stuck between a rock and a hard place. Nothing justifies murdering someone. Yet one can also see how he did it to survive. Lennie probably would have been executed or put in prison forever after killing Curley’s wife, and being associated with him would have meant the end of a livelihood for George. Of Mice and Men emphasizes that life is not fair, that life does not make sense, that this is all part of the human condition.

One of the most poignant, powerful memories for me was when Lennie and co. are in Crooks’ little room. Crooks, the black stable-hand, talks about how alone he feels as the only black man in the area.

“A guy needs somebody―to be near him. A guy goes nuts if he ain’t got nobody. Don’t make no difference who the guy is, long’s he’s with you. I tell ya, I tell ya a guy gets too lonely an’ he gets sick.”

I also nearly cried reading the above quote. It’s so direct and plainly stated but also so, so true–one of those simple facts of life that one often takes for granted until it is pointed out in this way. So many people in this novel feel lonely: Crooks because of his race, Lennie because of his disability, George because he has to take care of Lennie, Candy because he is old and lost his hand in an accident. Maybe Steinbeck is trying to say that we all feel alone in life for some reason or another at times. The great challenge is figuring out how to work through that, how to connect with people who are different from us just like Lennie does with Candy and Crooks. 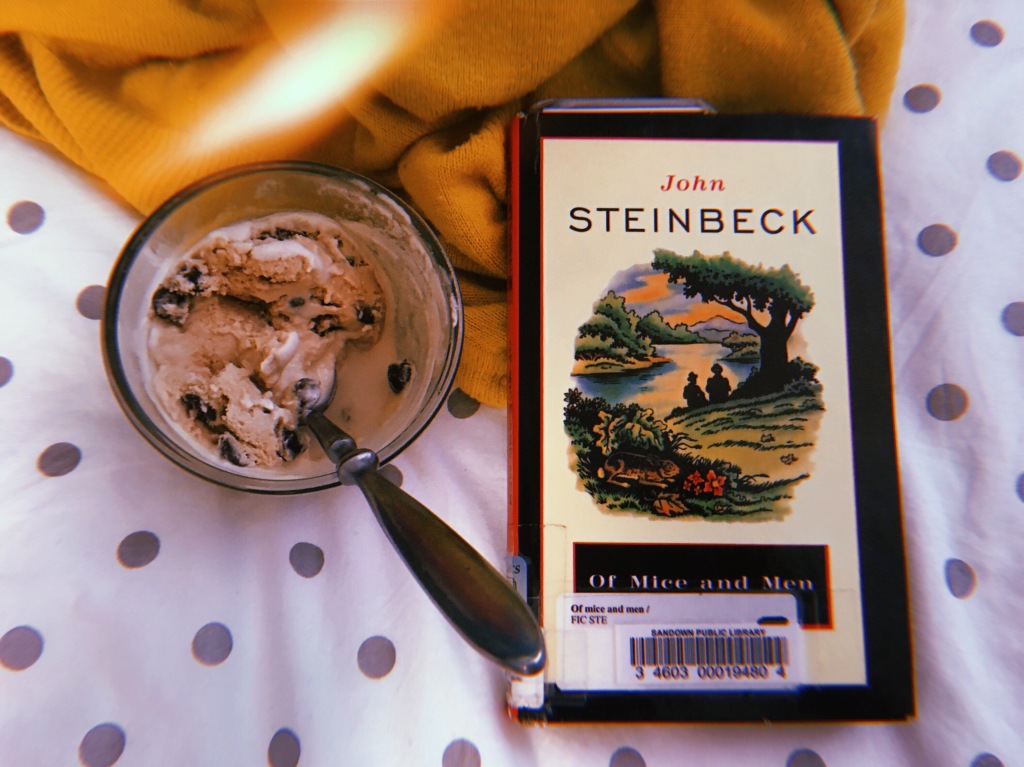 Steinbeck’s treatment of women in the novel left me with some mixed feelings. On the one hand, he reduces Curley’s wife to a stereotype at times, turning her into a housewife who can’t be trusted and only wants to seduce men and cheat on her husband. She doesn’t even have a name; throughout the entire novel she is only referred to as “Curley’s wife.” Yet at the same time he later gives her depth, explaining her backstory and how she wanted more from her life. In the end, I came to like her as a character and understand her more as a human. This eventual depth makes me think her character growth as intentional, that Steinbeck knowingly played on stereotypes at first only to turn them on their heads later in the novel. That’s what I’d like to think, anyways.

Overall, I definitely see why Of Mice and Men is a renowned classic that is still taught in schools nearly a century after it was published (in 1937). For a 107-page novel, this book certainly packs a weighty, emotional, thought-provoking punch. I can see myself returning to Of Mice and Men in the future for a reread–although with a tissue box at the ready this time! I would absolutely recommend this novel!

What are your thoughts on Of Mice and Men? What Steinbeck novel(s) would you recommend I read next? Let me know in the comments section below!

3 responses to “OF MICE AND MEN by John Steinbeck | Review”