*** I received a copy of this book in exchange for an honest review. All opinions are my own. ** 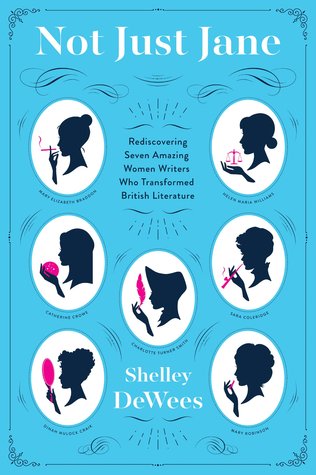 “In Not Just Jane, Shelley DeWees weaves history, biography, and critical analysis into a rip-roaring narrative of the nation’s fabulous, yet mostly forgotten, female literary heritage. As the country, and women’s roles within it, evolved, so did the publishing industry, driving legions of ladies to pick up their pens and hit the parchment. Focusing on the creative contributions and personal stories of seven astonishing women, among them pioneers of detective fiction and the modern fantasy novel, DeWees assembles a riveting, intimate, and ruthlessly unromanticized portrait of female life—and the literary landscape—during this era. In doing so, she comes closer to understanding how a society could forget so many of these women, who all enjoyed success, critical acclaim, and a fair amount of notoriety during their time, and realizes why, now more than ever, it’s vital that we remember.

DeWees does exactly what I think modern literary scholarship and research should do: uncover and highlight little known texts and writers while putting a new twist on old favorites. She does this expertly, writing with charm and wit about several women writers have been overshadowed by Jane Austen, the Bronte sisters, and other popular authors.

Not Just Jane offers so much more than a mere summary of these writers’ texts; instead, DeWees provides a comprehensive view of the lives of these incredible women in order to help explain their rise to (albeit temporary) success. She discusses both their familial and romantic relationships, their struggles with poverty, mental illness, and overcoming the stigma surrounding women writers at the time. Several of them turned to writing as a last resort, a way to financially support themselves in troubling times of financial need. Though many were not respected by their peers, a few of these talented women climbed the ranks of the social ladder and worked their way into impressive literary circles. For instance, who would have known that Catherine Crowe rivaled Charlotte Bronte in social prowess, was betrayed by Charles Dickens, and influenced much of Edgar Allan Poe’s work? DeWees shows us these women as human beings first and foremost before delving into their literary lives on the page.

This book also has an excellent layout and organization that contributes to the effectiveness of DeWees’ delivery. Though each chapter is dedicated to a different writer, they are all connected into a cohesive collection through smooth transitions and common threads. In this way Not Just Jane can be picked up and put down at the reader’s leisure without suffering from a lack of continuity. With that being said, my favorite aspects of this book are the themes interwoven throughout the chapters. All of these women challenged traditional gender roles in some way and faced obstacles and adversity on their road to publishing their works. Not only did were they looked down upon for entering the male-dominated world of literature, but their personal reputations often dictated the success of their work. When a scandalous affair erupted, the secrets of a marriage were uncovered, or a women’s “true” persona was exposed, these revelations ultimately had a huge influence on book sales. I think the inability to separate women’s reputations and personal lives from their work is one of the most fascinating topics discussed in this book, in part because it is also relevant in modern society.

Overall, Not Just Jane is a must-read for readers interested in British literature, the role of women throughout history, and expanding their literary horizons. While reading this book I scribbled down countless titles of interesting works to check out in the future and gained a greater appreciation for those writers whom we hear very little about in both literature classes and mainstream media nowadays. If only more writers would follow in DeWees‘ footsteps and conduct such valuable literary detective work!

Would I recommend it to a friend?: Yes, especially to someone interested in writers such as Jane Austen, the Bronte sisters, etc.

Thanks so much to Harper Perennial for the review copy!

Have you read this book or any texts by the writers DeWees mentions? Let me know in the comments section below!

19 Replies to “NOT JUST JANE by Shelley DeWees | Review”