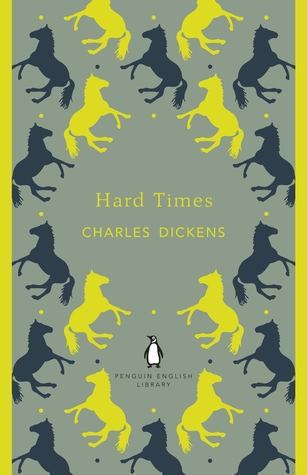 Hard Times by Charles Dickens is the first book I was assigned to read over the summer to prepare for the English Literature 1830-1910 tutorial I’ll be taking during my first term at Oxford. I was thrilled when I saw this title on the list because I’ve been meaning to read more by Dickens since reading A Tale of Two Cities and Great Expectations during my senior year of high school. While doing a bit of research I found that Hard Times is often considered to be his least successful and least read work. This surprised me: What was it doing on my reading list, then? Determined to come to my own conclusions, I set out to read this novel in a single weekend.

If this is Dickens’ “least successful” text, then I’d say he’s done pretty well for himself.

I imagine that the primary reason we’ve been assigned to read this novel is its focus on the “social problem” in England during the nineteenth century. The factory workers of Coketown are known as the “Hands” and are nearly always viewed as a homogenous, ungrateful, lazy group by those in the upper classes. Mr. Bounderby, an owner of a mill who prides himself on being a so-called “self-made man,” believes that all Hands have one object: “to be fed on turtle soup and version with a gold spoon”. (In other words, to live lives of luxury without earning it through hard work.) We see how entrenched this ignorant opinion of the Hands has become when Louisa visits Stephen Blackpool’s room and realizes that not only is it the first time she’s visited the house of a Hand, but it’s also the first time she’s thought of them as individuals rather than as a single group. Prior to this visit, Louisa “had scarcely thought more of separating them into units, than of separating the sea itself into its component drops.” On the whole, Hard Times exposes the unjust gap between the rich and the poor and criticizes the way the lower classes are treated as less than human.

An important and fascinating theme that runs through the entirety of Hard Times is the duality of “Fact” vs. “Fantasy.” Thomas Gradgrind impresses the importance of Fact on his children, essentially brainwashing them into believing that fairy tales and imagination deserve no place even in the lives of children. On the flip side of this rigid mindset are the zany circus members that thrive on creativity, spontaneity, and fun. As Louisa Gradgrind grows older she begins to realize that she can’t live a happy, fulfilling life without the emotion and passion that comes with “Fantasy.” I think this theme is incredibly interesting because it’s both connected with and disconnected from the socioeconomic issues of the novel. The coldness of apathetic “Fact” is what allows people like Mr. Bounderby to treat the factory workers like they are mere numbers, whereas Louisa’s internal struggle mainly revolves around her own emotional dissatisfaction. The message here is overwhelmingly clear: a balance between Fact and Fantasy is key.

At the core of every Dickens novel is his undeniable gift for storytelling. I can’t help but become incredibly invested in his stories once I begin reading them. His characters are carefully crafted with unique struggles, desires, eccentricities, and beliefs. Hard Times has been criticized for its “puppet-like” characters that sometimes said to be mediocre representations of actual “Coketown” residents (much of the novel was constructed from Dickens’ observations of a manufacturing town rather than personal experience living there). Whether or not that criticism is warranted, I wish to highlight an important redeeming quality of Dickens’ characters: they evoke emotion and human connection. I found myself holding my breath whenever a plot twist occurred (and trust me, there are many), anxiously awaiting to see how it would affect the characters involved. At one point while reading I actually gasped out loud when something bad happened to one of the characters I particularly liked– needless to say, my family members in the next room were pretty confused. The fact that readers can connect so easily and deeply with Dickens’ characters is a major strength of his work and abilities as a writer.

Though Hard Times is not my favorite Dickens novel, I still believe it deserves to be read widely and often. Definitely don’t let a misleading reputation keep you from reading this gem!

Would I recommend it to a friend?: Absolutely! I think this is an excellent read whether or not you’ve read Dickens before.

What are your thoughts on Hard Times? What’s your favorite Dickens novel? Which one should I read next? Let me know in the comments section below!