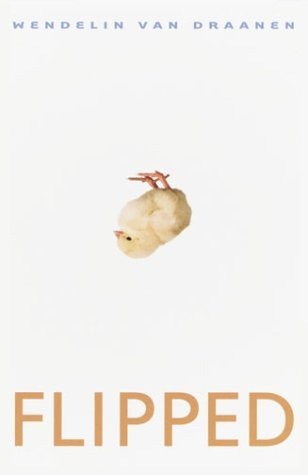 People change. We’re all constantly changing whether we’re conscious of it or not, yet sometimes this fact is ignored in books. In fiction, it’s common for love interests to last forever and for desires to seem set in stone once they appear; however, nothing is permanent in Flipped. In this middle grade novel, Wendelin Van Draanen tells the story of two kids whose opinions of each other change over the course of several years. The more they learn about each other the more topsy-turvy the story becomes as their attitudes flip in different directions. When one of my best friends realized I had never read Flipped as a kid she immediately urged me to read it. I’m so glad I took her recommendation!

Let me just start by saying that Van Draanen is a master at channeling her inner middle school voice. It’s so realistic that I felt as though I was reading something that could have been written by twelve-year-old me! It was really interesting to read about the same event from the different perspectives of Juli and Bryce and to see how their views of the world change over time. Flipped is yet another reminder of why I love character-driven stories.

Though Juli and Bryce are the protagonists of the novel, Van Draanen also focuses a lot on family dynamics in general. The story sets up a sort of compare-and-contrast situation between the Loski and Baker families, allowing the reader to notice telling similarities and differences. I love that there aren’t only middle schoolers and their parents in this book; rather, we get to know teenagers and grandparents as well. The relationship between the Juli’s dad and his brother is also really thought-provoking and eye-opening, though I don’t want to say too much and spoil an important detail of the story.  All in all, I think Van Draanen does a great job of showing how complicated, imperfect, and dynamic families are in real life. No family is perfect, not even in literature.

This book reflects many aspects of real life in a way that feels incredibly relatable. The story exposes a lot of things about human nature and daily life in general that we don’t always like to admit. For instance, the Loki and Baker families have lived across the street from each other for years yet they hardly know anything about one another. This disconnection leads to a striking question: How much do we really know about the people we interact with every day? How often do we take time to really get to know people rather than just gliding by with little more than surface level knowledge? Why don’t we communicate each other more genuinely about things that really matter rather than surviving on meaningless small talk? These questions are relevant to anyone at any point in their life, which is one of the many reasons I would argue that Flipped deserves to be read by people of all ages. The themes Van Draanen emphasizes touch on elements of our lives that we rarely stop and think about, making it even more important that we take the time to do so now.

Overall, I wish I had read Flipped when I was younger because I have a feeling that I would have absolutely loved it. How have I been missing out on this wonderful book all these years? If you haven’t read this book yet, please don’t make my same mistake: read it now!

Would I recommend it to a friend?: YES!!

What are your thoughts on Flipped? Have you seen the movie adaptation? Have any recommendations for other middle grade books? Let me know in the comments section below!