What could a classic novel that was initially serialized in the nineteenth century and a recent bestseller that became a successful movie on the big screen possibly have in common? A lot, actually. Though Wilkie Collins’ The Woman in White and Gillian Flynn’s Gone Girl were published over a century apart, they are nevertheless linked in numerous ways. 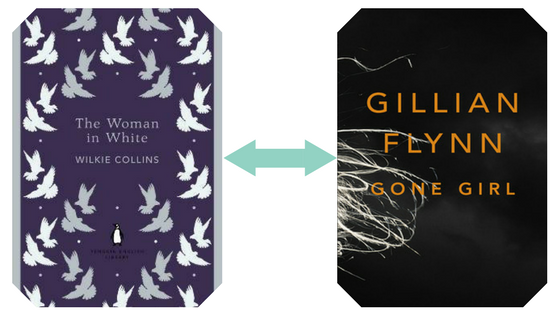 Genre || The first similarity is probably the most obvious one; however, I think it’s still worth mentioning because it shows the great influence that The Woman in White has had on literature over time. These thrilling, suspenseful mystery novels have been popular with audiences for centuries, especially with their sensationalism and emphasis on domestic scandals.

Narration || Both of these books have multiple narrators, many of which are unreliable. Though most of the narrators of The Woman in White go out of their way to establish their credibility at the beginning of their accounts, we cannot rule out the fact that they may still be biased in their storytelling. As we read Gone Girl we learn to be on guard when Amy is narrating (her charming diary isn’t quite what it seems). Speaking of Amy’s diary, both of these novels incorporate written records as forms of narration. Not only does this add intrigue to the story and depth to the characters, but it also makes for a more interesting reading experience as different writing styles and voices are used for each narrator.

Duality || I love when books focus on dualities because the possibilities are endless. I don’t want to give away any important details of either book; however, I will say that both authors play with the idea of dual personalities, personas, identities, morals, and meanings. We see the struggle between the perceived and the actual; in other words, what others believe in contrast to what we truly are in actuality. Watching these duos unfold is always fascinating!

Explanations || Plots of mystery novels—especially great ones—can quickly become complicated and difficult to follow. Fortunately, both of these books clearly explain to the reader what has happened and how all of the details are interconnected in a cleverly crafted web. By the end of the novel you know exactly what occurred and why, which I always appreciate. Being left hanging at the end of a standalone can be incredibly frustrating!

Considering parallels like these between books can breathe new life into what we read. Though I didn’t love Gone Girl when I first read it, finding elements that it shares with The Woman in White has allowed me to appreciate it a bit more.

What do you think of this classic couple? What other books would you pair with The Woman in White? What are your thoughts on either or both of these books? Let me know in the comments section below!

11 thoughts on “A Classic Couple: The Woman in White and Gone Girl”