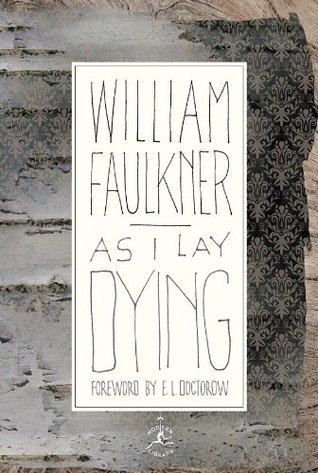 I’ve read this intense novel twice: once last summer just for fun and once this past summer for the Faulkner tutorial I’m currently taking at Oxford. Each time I’ve been taken aback by the depth and complexity of this story. What first appears to be a simple task– transporting a coffin to a burial ground– quickly transforms into a journey that will change the family forever.

If you’ve never read this book, here are seven reasons why you should:

1. Relatively short length || At around 250 pages, As I Lay Dying is more manageable than some of Faulkner’s other texts. The pace moves quickly due to the short chapters and numerous narrators, meaning that it feels even shorter. If book length intimidates you, then this might be a good place to start with Faulkner.

2. Narration || With 15 narrators and 59 chapters, this novel is certainly a whirlwind. This jigsaw puzzle of perspectives forces the reader to piece together the story bit by bit. Each chapter is labelled with the narrator’s name, though Faulkner writes his characters so distinctly that the reader would likely be able to identify the narrator even without the helpful note at the top of the page.

3. Family dynamics || The abundance of narrators also offers the reader a close look at the inner workings of the Bundren family. Over the course of the novel we learn the many secrets this family has been hiding, including knowledge that only certain family members know.

4. Plot twists || There are so many details and layers to this story that I was still surprised when I read it a second time. From uncovered secrets and personality traits to unexpected events in the middle of the night, As I Lay Dying is sure to make you gasp at least once.

5. Dewey Dell || Dewey Dell is my favorite character because she’s arguably the most interesting character. Now that Addie Bundren is no longer living, Dewey Dell is the only female in the family. Though we do hear from Cora– a woman living near the Bundrens– Dewey Dell’s narrations allow us to peek into the life of a teenage girl during this time period. Though her narration was written by an older man and therefore must be taken with a grain of salt, it’s nevertheless telling that Faulkner decided to focus on pregnancy as a major theme. The idea of virginity is a common thread throughout Faulkner’s works, suggesting that humans have been preoccupied with the concept of purity in womanhood for far longer than we’d like to admit.

6. The challenge || I’m not going to lie: this book is quite challenging at times. What is the reader to do when characters start arguing over whether their mother is a fish or a horse? However, reading this novel twice has taught me that all the details unfold eventually– you just need a little patience.

7. The ending || The last line of this novel has made me gasp out loud each time that I’ve read it (even though I knew it was coming the second time around). It’s amazing that a simple sentence can change how you think about everything you’ve just read.

I hope I’ve convinced you to pick up this brilliant novel!

What are your thoughts on As I Lay Dying? What’s your favorite Faulkner text? Have any recommendations? Let me know in the comments section below!