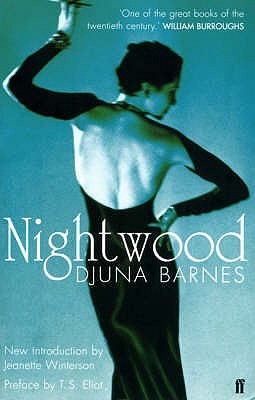 Published in 1936 despite numerous rejections from editors and critics alike, Djuna Barnes’s novel Nightwood is a sprawling narrative of love, lust, and loss. Set against the bustling backdrop of several iconic cities (Paris, Berlin, Vienna, etc.), the story follows a tangled web of characters all struggling to fully express their identities in a society within rigid expectations of who they should be and how they should behave. In his written introduction to the novel, T.S. Eliot describes Nightwood as possessing “the great achievement of a style, the beauty of phrasing, the brilliance of wit and characterization, and a quality of horror and doom very nearly related to that of Elizabethan tragedy.” I can’t think of a better way to articulate the experience of reading such a bizarre, haunting, beautiful, decidedly modernist novel.

Although I love reading modernist literature, particularly that written by American writers, I had never heard of Djuna Barnes or her work prior to being asked to read Nightwood for one of my tutorials. Now that I’ve read some of Barnes’s work I can’t help but feel as though it is a great shame that she is not featured in more reading lists or is not more widely read in general. While the novel’s reliance on experimental narrative structure and a modernist style may initially seem intimidating to some readers, it can actually feel freeing to read such a rambling story. (In fact, some literary critics in the past have claimed that Nightwood should not even be considered an actual novel in form.) You never know where the narrative will turn next– a new character? a new city? a leap in time? In this way, Nightwood is incredibly engaging, engrossing, and captivating.

If you’re like me and adore stories that are motivated by characters rather than plot, then you’ve come to the right place. There is little to no discernible plot in this novel; rather, the text is primarily character-driven with dialogue that almost feels as though the characters are talking at one another rather than conversing with each other. Nearly all characters in this novel struggle with some form of their identity that is not accepted by traditional mainstream culture. Notably, this novel is incredibly important in studies of lesbian literature as well as fiction that challenges the traditional male/female binary in general. Although Judith Butler coined the term “gender performativity” in 1990 in her book Gender Trouble, Barnes had already been discussing the concept of performing gender decades earlier in Nightwood. From masculine Robin in a relationship with Nora and Jenny to Matthew, a man who pretends to be a doctor and cross-dresses in his bedroom, numerous figures in this novel challenge the rigid stereotypes of masculinity and femininity that have permeated society for centuries.

Overall, Barnes’s Nightwood is a strange but remarkably valuable novel that more people should be encouraged to read. In the male-dominated realm of early twentieth century English modernism, Djuna Barnes’s voice is a welcome change.

What are your thoughts on Nightwood? Have you ever read Judith Butler’s Gender Trouble? Let me know in the comments section below!

Happy belated Valentine’s Day! 💕 hope you all had a great weekend, no matter what your ♥️ day plans were! In the spirit of the season, let me know: What is your favorite romance novel? • • • • #bookstagram #nutfreenerd #valentinesday #romancenovel #bookish #bookishlovegroup
Up on the blog today is a very exciting Top Ten Tuesday list: books to cheer you up on Valentine’s Day! 💕 Sometimes this isn’t the happiest holiday for people, so I wanted to make a list with some books that would make this day little brighter. ✨ Link is in bio!! How do you feel about Valentine’s Day? 💛 • • • • • #bookstagram #everythingiknowaboutlove #bookblog #bookish #bookpics #nutfreenerd
Needing lots of coffee on this Monday morning ☕️ How’s everyone doing? On a scale of 1 (🥳) to 10 (😴), how sleepy are you today? • • • • • #bookblog #mugmonday #nutfreenerd #bookblogger #coffee #lawstudent
Happy Sunday! ☕️ Lately I’ve been feeling my excitement about blogging return, which is a rare sight in my busy law school schedule. I’m trying to find time in my day to work on posts because it’s something I really love. 💻 Do you have a blog? If so, leave me a link in the comments!! (Link to mine is in my bio!) • • • • #bookstagram #bookblogger #bookblog #nutfreenerd #lawstudent