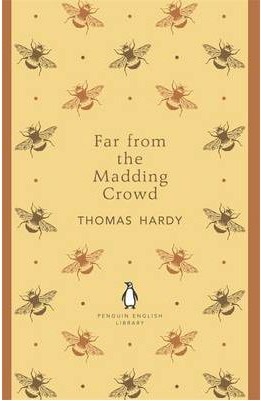 To be honest, my initial expectations weren’t very high for Thomas Hardy’s classic novel Far from the Madding Crowd. All I knew about it before opening the first page was that it’s often hailed as an “epic” love story. My track record with love stories has been hit or miss at best (anyone else feel lukewarm about Romeo and Juliet?), so it was no surprise that I felt a bit hesitant about this story. My wishy-washy attitude towards it probably explains why it’s been sitting on my bookshelf for months, untouched.

Oh, Holly of the past, why do you do this?

Far from the Madding Crowd far surpassed every initial expectation I possessed, leaving my doubts in the dust wondering why on Earth I didn’t pick up this book sooner. This novel has numerous strengths, but for the sake of time I’ll limit my discussion to only a handful: complex characters, the story’s depth beyond that of “just” a love story, Hardy’s writing style, and the novel’s ability to be so emotionally gripping.

First, let me frankly say that I didn’t really care for the character of Bathsheba Everdene. While I admire her independence, work ethic, and determination, it’s clear that she dug herself into many holes due to her stubbornness, impulsiveness, and a foolhardy desire to maintain an unprecedented level of pride. Her inability to step back and view the bigger picture time and time again frustrated my inner realist to no end. But here’s the strange thing: I didn’t really mind. Usually when I dislike a main character it tends to taint the rest of the book for me; however, I felt as though it was partly intended for the reader to have mixed feelings toward Bathsheba. In this way, I’m reminded of F. Scott Fitzgerald’s The Great Gatsby. Daisy and Tom and even Gatsby are not necessarily the most moral or thoughtful people (actually, they’re quite easy to dislike), yet I think that’s the point. For me, the most redeeming character in Far from the Madding Crowd is Gabriel Oak, the poor farmer who is the first man we see fall in love with the headstrong Bathsheba. Oak was like a breath of fresh air in a hot, stuffy room. His common sense, strong morals, and kind heart were sorely needed in the midst of everyone else’s ridiculousness. Without Oak’s grounding good nature, it’s safe to say that my opinion of this novel would not have been so positive.

Another important strength of this novel is its ability to transcend the simple and largely stereotyped love story drama. Though the main plot is focused on the love “square” between Bathsheba, Gabriel Oak, William Boldwood, and Sergeant Troy, the novel as a whole is about so much more. One can certainly choose to read this story as solely one of romance and drama; alternatively, it can also be interpreted as social commentary on marriage, gender roles, and the hierarchy of socioeconomic classes. Bathsheba cannot solely consider her own emotions when choosing a husband because doing so might put her social status or wealthy in jeopardy. This complicated web of nuanced details that goes into these relationships is the real brilliance of the novel, in my opinion. Despite the dramatic tone of the story, Hardy nevertheless presents a more realistic view of everything involved in forming a marriage during this time period.

Then we come to the topic of Hardy’s writing style, which surprised me from the very first page. Not only is his writing beautiful, but it’s also accessible in a way that a lot of flowery writing is not. The best way to explain this is undoubtedly to show a quote from the novel, so here is one that I love:

“It is difficult for a woman to define her feelings in language which is chiefly made by men to express theirs.”

Flowery without being over the top. Simple yet powerful. Perfect.

Though the ending was fairly predictable, this novel hardly left my grasp until I had completely finished it. Why? Because Far from the Madding Crowd is incredibly emotionally gripping. I became especially attached to the goodness of Gabriel Oak and his determined loyalty to Bathsheba, even though she often showed him little kindness in return. Despite my frustrations with her, I eventually found myself becoming attached to Bathsheba herself. After all that she went through, I couldn’t help but want the very best for her in the end. I think that much of this attachment and emotional suspense comes from excellent character development and the way Hardy makes all of these characters decidedly human and flawed. There’s a degree of familiarity here that is somehow reminiscent of one’s own relationships and experiences.

Overall, Thomas Hardy has converted me into an eager fan of his work with Far from the Madding Crowd. Whether you’re looking to read a love story or simply an expertly woven tale, I highly recommend reading this account of Bathsheba’s struggles.

Would I recommend it to a friend?: Absolutely!!

Have you ever read this book before? What are your thoughts on it? Have any recommendations of other works by Thomas Hardy that I should read? Let me know in the comments section below!