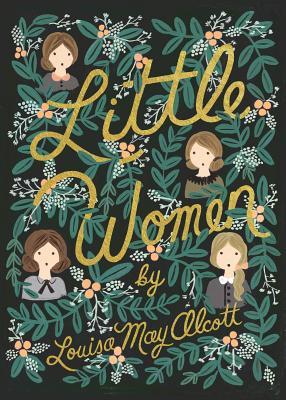 The enduring popularity and praise of Louisa May Alcott’s Little Women has intrigued me for some time. I couldn’t help but wonder what made this classic American novel stand out among its neighbors, particularly since it initially seemed to be a simple story about four sisters living during the Civil War. What is it about the March family that has captivated and enchanted readers, especially girls, since its publication in 1868? What was so special about Beth, Amy, Jo, and Meg that catapulted these fictional sisters into over a century of literary fame? These and numerous other questions swam in my mind as I purchased my own copy of Little Women and ultimately fueled my desire to read this beloved classic.

Needless to say, I now understand all of the praise that these sisters’ story has received over the years. What first appears to be a simple story about a poor family’s optimistic way of life actually offers the reader so much more: lessons of morality, right and wrong, friendship, love, loss, materialism, growing up, and countless other meaningful messages that anyone and everyone can benefit from reading. If I had to describe Little Women in only a single word, I would resolutely exclaim: “QUAINT!” This is perhaps the most quaint book I have ever read. A warm, fuzzy feeling blossomed within me from the very first page and continued to bloom until I had closed the cover for the last time. If you’re looking for a book to make you sigh with contentment and joy, then do yourself a favor and look no further than this classic.

I think a great deal of the charm and fun of this novel stems from the reader’s ability to see him or herself reflected in many of the characters. It’s tempting to label myself purely as a headstrong, adventurous, curious Jo or solely an obedient, responsible, kindhearted Meg. However, over time the reader surely realizes, as did I, that she is a blend of all of the sisters combined. Each sister has personality traits that we wish we could both embody and cast aside. They are undeniably human, complete with faults and flaws that make us point at the page and exclaim, “So I’m not the only one who does this!” or “Other people feel this way, too!”

Apart from the sisters, my favorite characters were by far Laurie and Mr. Laurence. I loved watching the friendship between Laurie and Jo grow and develop as they aged as well as the adorable friendship between Beth and Mr. Laurence. I longed to visit their house and spend hours in their impressive library, listening to the notes of the grand piano floating down the hall. Laurie’s funny, witty personality made me laugh and grin more times than I could count and he consequently played a main role in many of my favorite scenes. (Camp Laurie, anyone?)

Is this story unrealistically ideal? Yes. Though it does address a handful of unpleasant topics (death, poverty, etc.), on the whole it almost resembles a fairy tale in the way that everything wraps up neatly at the end. Part of me wishes that Alcott had allowed a few of the girls– especially Jo– to be more independent and, essentially, not get married. Because this story is set during the Civil War, it is understandable that it wouldn’t align with the values of modern feminism and the idea that women need not marry in order to live a happy and fulfilling life. Still, while reading I couldn’t help but hope that at least one of the girls would find the courage and independence to go off on their own and set sail for a life of unexpected adventures. I did cringe inwardly at times, particularly when Meg’s mother emphasized the vital importance of pleasing her new husband and ensuring that he was happy no matter the circumstances. Again, a little more female independence would have been lovely, but my expectations weren’t too high given the time of the book’s publication.

Another small qualm I have about Little Women is that I was hoping for more historical context or direct interaction with the time period. Of course, the war was obviously mentioned in regard to the girls’ father being away fighting in it; however, no specific information was discussed concerning sides of the war or race relations in general. I’m assuming that they were fighting on the side of the Union since none of the people surrounding them seemed to own slaves or live on plantations, but no questions are answered concerning their views towards what is going on in their country at this tumultuous time in American history. I find it a little hard to believe that race relations and the war more specifically would not have come up in conversation at some point over the course of these years in their household.

Overall, it’s clear that Louisa May Alcott deserves all of the praise given to her charming, enduring novel Little Women. Despite its predictability and slow pace at times, I couldn’t help being captivated by this adorable, heart-warming story of sisterhood, family, love, and life.

Would I recommend it to a friend?: Absolutely, especially to someone who enjoys reading character-driven stories that focus on family and relationships.

Have you read this book before? What are your thoughts on it? Let me know in the comments section below!

28 thoughts on “LITTLE WOMEN by Louisa May Alcott | Review”